A land dispute I’m handling brings me an average of thrice a year to Daet, Camarines Norte in the Bicol region for court hearings. It’s a long eight-hour drive (I hitch a ride in the client’s vehicle) which passes through parts of Batangas, Laguna and Quezon, with a hour-long final stretch of winding roads appropriately called bitukang manok that always gives me motion sickness. I actually dread that last leg of the drive.

Daet itself isn’t a bustling capital by any standard, and most of the action centers on the market area. I had occasion to roam around the palengke alone during my last trip, and found some unusual items worth chronicling. 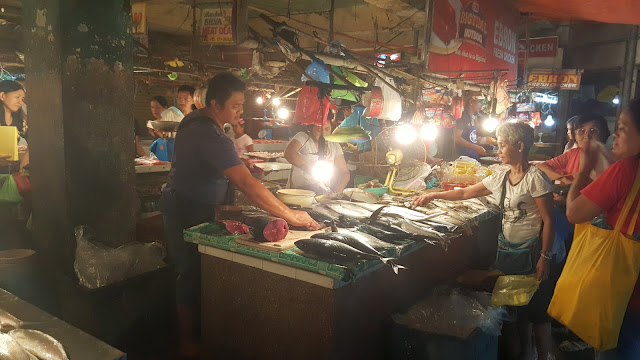 There were your typical bangus, tilapia, small grouper, galunggong and tuna varieties, but what caught my eye were the flying fish and their abnormally-long pectoral fins. Made me wonder how fishermen caught these beautiful creatures – was it during “flight” or down the ocean? Intriguing fishes. First time I’ve seen them anywhere. I was told they were best eaten fried and had fine tinik.

What I initially thought of, and even posted in Facebook as duhat turned out to be maligang, a more compact, rounder fruit that looks very similar to duhat and is most likely related to it. We used to pick lots of these black plums from grandfather’s tree in Obando when we were kids, and the maligang’s flesh was less soft and tasted more sour than duhat’s, even if the ones I bought were already classified as ripe.

Markets are some of my favorite places anywhere, and are always worth exploring. I’d be doing more of these brief excursions to this particular area in future trips.

I was rather excited to try the Adobo and Laing Pizza at Graceland, a Bicolano fastfood place that was having a “pizza festival” at the time of my visit. My early Sunday dinner treat was not meant be, however, as the lady at the counter told me they didn’t have any pizzas that day. They’d all be available the next day, Monday. “I’d be gone tomorrow,” was my dejected reply.

I settled instead on a quite good Chickenjoy imitation. Would’ve been happier with the pizza.