Instead, Go said Duterte would support any anti-discrimination legislation that is patterned to a similar ordinance that was enacted in Davao City when the President was its vice mayor.

“There has been a misunderstanding during PRRD’s previous press conference.”

“There has been a misunderstanding during PRRD’s previous press conference. What he is implying is his support to the anti-discrimination law,” the legislator said during an interview in Davao City.

The clarification came after Duterte bared his plan to certify the SOGIE bill as urgent.

The news gained negative feedbacks from sectors opposed to the SOGIE bill.

But Go said the President was misunderstood.

“He wanted the anti-discrimination law to be patterned like the one approved in Davao when he was then the vice mayor,” the senator said.

In December 2012, the Davao City Council approved the anti-discrimination ordinance (ADO) which penalizes all forms of discrimination. It defines discrimination as “acts committed when a person impinges on the right or freedom of another on the basis of national or ethnic origin, religious affiliation or belief, gender, descent, race or color.”

“I think this law will be favored by the majority.”

“That is what he [Pres. Duterte] wanted. I think this law will be favored by the majority,” he added.

Despite turning down the SOGIE bill, Go disclosed that Duterte will adhere to his promise on the holding of a national convention for the lesbian, gay, bisexual, transgender, queer (LGBTQ) community.

Go was in Davao City as the guest speaker during the graduation rites of the 1st Fire Basic Recruit Course (FBRC) class ‘Mawaraw” 2019-04.

About 265 graduates coming from Region 10, Region 11 and Caraga completed the 640 hours of training, making them the first batch to finish the course. 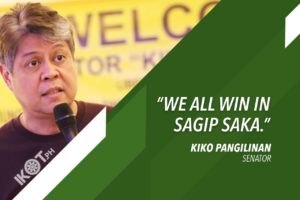