The highlights of our recent Region VII trip to Dumaguete and Oslob, hands down, would have to be the close interactions with marine creatures.

I already did the dolphin watching and the swim with the pawikans in 2011 but still eagerly looked forward to experiencing them again when we went to Bais and Apo Island, respectively. I took far better photos of the dolphins before, compared to this particular outing in 2017, mainly because these wonderfully playful cetaceans swam beside our boat six years ago.

The Apo Island experience was also a bit different. Residents had already sealed off with nets a wide area near the shore where the turtles foraged for food. Sightings and interactions were still fairly regular despite the designation of a snorkeling no-go zone.

I feel conflicted about the whale sharks in Oslob. These gigantic, gentle marine animals, the largest fishes in the world, had chosen to stay in the area because of the ready abundance of food, their migratory patterns disrupted by locals who don’t want their source of tourism income going elsewhere. The close to 250 butanding (the number was furnished by our bangkero) have therefore become “domesticated” in a sense, being seduced to surface and swim close to the shore and to hundreds of paying visitors by boatmen carrying pails of shrimp and small fish.

There’s no doubt that these creatures’ eating habits and breeding patterns are affected by the aggressive human-induced practices in what’s supposed to be a sleepy coastal town in Cebu. I don’t see any good long term effects of the commercialism for the poor animals, some of which had bruises and scrapes from their regular interactions with people and their boats and oars.

The elation of swimming close enough to actually touch the giant whale sharks is tempered by the realization that these creatures are trapped and exploited in Oslob. 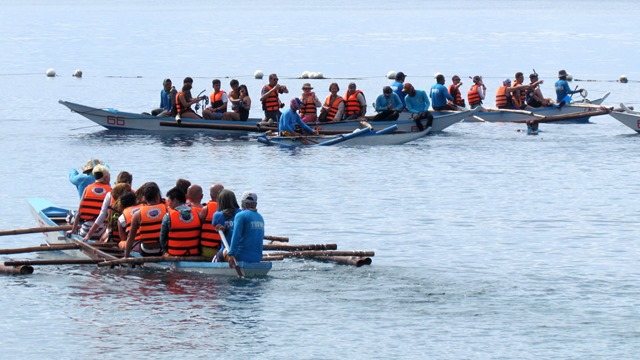