The League of Tourism Students of the Philippines (LTSP) National Capital Region Chapter held its LTSP National Leaders’ Meeting 2018 last Aug. 18 at the Mandel Auditorium, Trinity University of Asia with its goal of reconnecting and maximizing the potential of the tourism youth organizations from different universities and colleges. 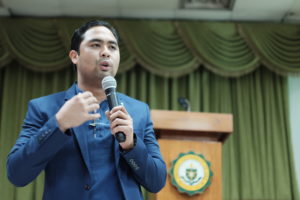 Xander Kim Sigua, Executive Director of the Tourism Educators and Movers Philippines (TEAM Philippines), a leading advocate for the protection and promotion of the tourism industry, encouraged and inspired the youth by sharing the story of how he founded LTSP despite the lack of resources.

“LTSP played a huge role in honing me and helping me where I am today.”

Through hard work and passion, LTSP eventually grew and became the biggest national organization for tourism students in the Philippines.

LTSP has been giving opportunities to the youth to voice out opinions and positions on tourism issues which the government has recognized.

“LTSP promises to continue raising awareness and consciousness among the youth.”

“The organization has allowed me to expand my network and service. For instance, having served as consultant to former Department of Tourism Secretary and now Senator Dick Gordon,” said Sigua.

He emphasized that this kind of opportunity could be possible for all the students who are part of the organization.

“LTSP played a huge role in honing me and helping me where I am today”, said Sigua.

“LTSP promises to continue raising awareness and consciousness among the youth because of their opinions and actions’ vital role in societal issues,” said Sigua.