NURSES TO GET ANOTHER SALARY HIKE IN PROPOSED SSL – GO

Senator Bong Go has assured nurses that he will continue to prioritize their welfare and push for initiatives to improve quality and accessibility of healthcare services in the country.

Nurses Association of the Philippines, Inc. (MCNAP) at the Manila Hotel.

“We made sure health care professionals would not lose their jobs.”

The legislator shared that as the chair of the Senate Committee on Health, he defended the budget increase for the Department of Health (DOH) during the budget deliberations to ensure quality and accessible healthcare for all Filipinos, as well as to safeguard the welfare of health workers including nurses.

“The Senate approved on third and final reading the 2020 budget. We made sure that the DOH would have enough budget for its operations and health care professionals would not lose their jobs,” the lawmaker said.

“We allotted P3.173-B to upgrade the salaries of nurses.”

Members of MCNAP also cheered when he shared that the P4.1-trillion 2020 budget includes the amount that is needed to implement the Supreme Court decision that the salaries of government Nurses 1 and 2 should be at salary grade 15 and 16, respectively.

“We allotted 3.173 billion pesos to upgrade the salaries of Nurses 1 and 2, in accordance with the recent Supreme Court decision,” Go said.

He also said that he has filed a bill that seeks to increase the salaries of civilian government employees, including nurses.

“Iba pa po ‘yung para sa desisyon ng Supreme Court. Para ito sa lahat,” Go explained, adding that he will prioritize the passage of a new Salary Standardization Law (SSL) which will provide for the increase in the current salaries of all government workers.

He filed in July Senate Bill (SB) 200 or the proposed “Act Modifying the Salary Schedule for Civilian Government Personnel” which seeks to increase the salaries of all government workers, including nurses and teachers. The bill will be discussed in the Senate plenary before the year ends.

Go added that some of the other bills that he filed will surely help nurses further in their professional development and in protecting the health of mothers and children.

“These bills seek to amend certain sections of the Philippine Nursing Act to provide for an advanced nursing education program; expand the coverage of the mandatory basic immunization program, institutionalize an Emergency Medical Services System and mandate the appointment of at least three barangay health workers in every barangay,” he said.

Go also mentioned that his proposed legislative measure that will institutionalize Malasakit Centers will soon be enacted into law. He recalled that the Malasakit Center, which has been opened in 51 hospitals all over the country, started as an idea when he was still the Special Assistant to the President and was inspired by his experiences serving in Davao City for then Mayor Rodrigo Duterte.

Go also informed the nurses that President Duterte will sign the proposed General Appropriations Act (GAA) for Fiscal Year 2020 as soon as both houses of Congress finish the Bicameral Committee discussions. The Senate passed it on third and final reading last November 27. 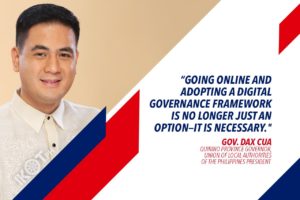 LOCAL GOV’TS SHOULD SERVE ONLINE IN THE ‘BETTER NORMAL’ – CUA 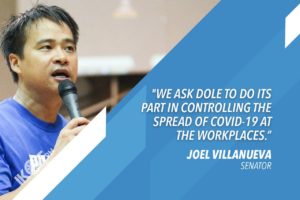 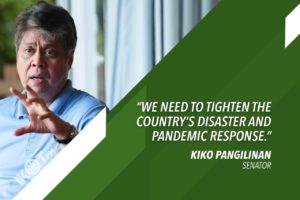 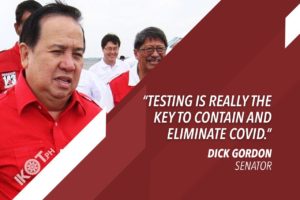 GORDON TO LGUs: HAVE CONSTITUENTS TESTED FOR COVID-19